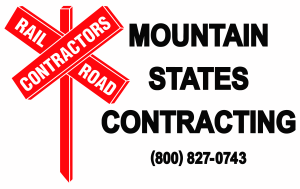 One of our trusted and long time supervisors, Fernando, led his crew across the Nevadan deserts this month to start a new project in the “Battleborn” state. The crew began a large railroad construction project, requiring multiple designs, and a long build time. After loading up the ties and ballast, as well as coordinating the fleet of equipment at their disposal, the crew set off for the job site to begin work. Follow this exclusive look into the process of a railroad contractor, and a new design / build project.

Dealing with a facility such as this one in Nevada required that the crew installed multiple switches and crossings across previously existing rails, roads, and other passageways. They also had to keep in mind with this railroad design that there were multiple storage and warehousing facilities on site that required rail access. The design had to be perfect, and had to be over encompassing of the job site’s various establishments, hazards, and personnel. However, our team of architects and surveyors were on top of the job, and drafted a functional and efficient track that would meet our client’s desires as well as ensure all safety standards would be upheld. As the surveyors left and the architects sent their plans over to Fernando, the crew mobilized and began to gather the equipment needed for the new railroad construction project. A few days later, the crew was on the move.

After receiving the drafts for the new design/ build job, Fernando and his crew lugged ballast, ties, rails, rail clips, and more out to the job site to begin the railroad construction process. 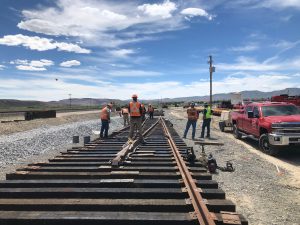 Fernando and his crew at a new railroad construction project in Nevada.

To begin, the crew was required to tamper and raise the rack in order to ensure a sure foundation for the new rail system. This requires using one of the many different equipment found in our fleet to grade the track, and either lift or lower it to ensure safety standards and standards of practice. Once the track is graded, the crew can then begin to install ties using one of our tie placers. These ties ensure the solidity and longevity of the rail system, and are essential to ensuring a perfect outcome for a railroad construction project. After this strenuous process, ensuring miles of track have the correct tie placement, the crew can then begin to ballast and install the rails.

Rails can be installed and placed to ensure fluidity in between pieces of the tracks, as well as to ensure that the grading was done properly. However, before any rail clips are installed, the crew needs to ballast in-between the ties to further secure the foundation of the rail as a whole. In the railroad construction process, this is essential to get done efficiently and properly. Once ballast is dumped and the ties are secure, the crew can then begin to secure the rails using rail clips.

Thank you for following this story, and stay posted for later this month when we finish the story with the finished rail!